There is an art to anniversary toasts and speeches just as there is an art to staying married. We tend to celebrate the big ones -- the 10th, 25th or 50th -- but all anniversaries should be celebrated. Perhaps a 12th anniversary does not warrant a blow-out party, but if you take a couple out for their anniversary, you'll certainly want to make a toast or say something appropriate.

While all anniversaries should be an event, there are traditional times when celebrations go beyond a quiet dinner or an exchange of cards and gifts.

Probably the anniversary which is celebrated most often with family and friends is the 50th. . . known as the golden anniversary. If a couple reaches that mark, they have beaten the statistical odds for a long-term covenant and deserve the admiration of those whose lives they have touched.

At the point of the 50th anniversary, a couple's children are grown and grandchildren are probably close to being adults. They have peaked in their working lives and retirement is here or near. The fact that a union has remained stable and solid for five decades is certainly a landmark to celebrate!

Other anniversaries also have special designations. The 25th is the silver one, and the 75th anniversary -- for couples who are lucky enough to make it that long -- is labeled the diamond anniversary. Indeed, there is an anniversary gift designated for almost every year of marriage.

While it is popular for people to give a gift to a couple's favorite charity as a tribute to their long marriage, the traditional gifts that go with certain anniversaries could become part of your toast or special anniversary message. 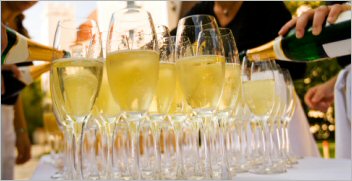 When offering an anniversary toast, be sure to congratulate the couple and make mention of significant points in their lives. You should also invite others to share special memories about the couple.

For inspiration, refer to some of the more popular anniversary toasts and sayings which blend humor with stereotypes.

(Cautionary note to sensitive  types:
some  toasts get their humor from stereotypes.)

Here are some phrases that have been used in anniversary toasts and speeches. Pick what is helpful and adapt to the couple you are honoring.

There are two occasions when a man doesn’t understand a woman – before marriage and after it.

A husband who wants a happy marriage should learn to keep his mouth shut and his wallet open.
--Grocho Marx

The best and most beautiful things in the world cannot be seen or touched; they must be felt.
-- Jonathan Swift

The best and most beautiful things in the world cannot be seen or touched; they must be felt.
--Hellen Keller

A good marriage is like a casserole; only those responsible for it really know what goes into it.
-- Oscar Wilde

More marriages might survive if the partners realized that sometimes the better comes after the worse.
-- Doug Larson

A good wife and health
Are a man’s best wealth.
-- Proverb

To love a person means to agree
To grow old with him.
--Albert Camus