These quotes about dad are ideal to use for Father's Day or any time you want to say something special about what dad means to you and can't find the right words. These are some of many quotes that will inspire you to express your feelings for that special man who has influenced your life in so many ways. 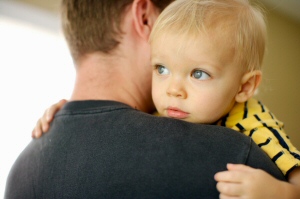 On Father's Day, families honor dad for his love and support and for how he teaches children what is really important in life.  If you need to make a toast or add a special note to a card, these Father's Day quotations and sayings can serve as inspiration to give you the right words to say. Quotes about dad are sure to warm his heart on his special day.

Quotes about Dad -- from solemn to silly

The greatest gift I ever had
Came from God;
I call him Dad!

My father gave me the greatest gift anyone could give another person; he believed in me.

By profession I am a soldier and take pride in that fact.
But I am prouder -- infinitely prouder -- to be a father.
A soldier destroys in order to build;
the father only builds, never destroys.

When I was a boy of fourteen, my father was so ignorant I could hardly stand to have the old man around.  But when I got to be twenty-one, I was astonished at how much he had learned in seven years.

Sometimes the poorest man leaves his children the richest inheritance.

Love and fear.  Everything the father of a family says must inspire one or the other.

Parents can tell but never teach, unless they practice what they preach.

My father taught me to work; he did not teach me to love it.

A man knows he is growing old because he begins to look like his father."

Good parents give their children Roots and Wings. Roots to know where home is, wings to fly away and exercise what's been taught them.

One father is more than a hundred school masters.

My grandfather once told me that there are two kinds of people: those who work and those who take the credit. He told me to try to be in the first group; there was less competition there.

By the time a man realizes that maybe his father was right, he usually has a son who thinks he's wrong.

I believe that what we become depends on what our fathers teach us at odd moments, when they aren't trying to teach us. We are formed by little scraps of wisdom.”
― Umberto Eco

A bad father never has a good son.
--Anonymous

From the father comes honor; from the mother, comfort.
-- Anonymous

A truly rich man is one whose children run into his arms when his hands are empty.

Any man can be a father.  It takes someone special to be a dad.