Following are some military retirement toasts and sayings that may be used at parties honoring new veterans. Be inspirational or humorous -- the choice is yours. Just remember to be respectful to the special person who has dedicated years of service for the safety and security of our country.

If you are giving a retirement party for a veteran, work in one or two of these military retirement toasts or sayings to honor the one who has served as a solider, sailor, airman, marine or member of the National Guard or Coast Guard.

Think about the good times and special bonds that veterans share during their military service.

A toast to one
whose service has guaranteed
the freedom we have
to celebrate today.

Today we honor John and salute his service.
We should always remember that serving one’s country
is the ultimate expression of love
for family, friends and neighbors.

Other quotes and wisdom for military retirement toasts and speeches 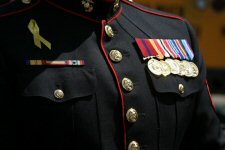 Some people live an entire lifetime and wonder if they have made a difference in the world. Marines don't have that problem.
--Ronald Reagan

Bravery is being the only one who knows you're afraid.
--David Hackworth

There is nothing better than getting shot at and missed. It's really great.
-- James Mattis

If you find yourself in a fair fight, you didn't plan your mission properly.
--David Hackworth

Never share a fox hole with anyone braver than you.
--Anonymous

Never trust a private with a loaded weapon or an officer with a map.
--Anonymous

Coffee tastes better if the latrines are dug downstream from the encampment.
--U.S. Army Field Regulations, 1861

It is generally inadvisable to eject directly over the area you have just bombed.
-- U.S. Air Force Manual

We make war that we may live in peace.
--Aristotle

The difficult we do immediately. The impossible takes a little while longer.
-- U.S. Navy Seabees

It is God's job to forgive Osama bin Laden.
It is our job to arrange a face-to-face meeting.
--General H. Norman Schwartzkopf

One of the best ways to keep peace is to be prepared for war.
--General George Washington

There is no such thing as an atheist in a foxhole.
--Anonymous

We sleep safely in our beds because rough men stand ready in the night to visit violence on those who would harm us.
--George Orwell

The only easy day was yesterday.
-- Navy Seals

They feed the crocodile in the hope that he will eat them last.
--Sir Winston Churchill (referring to appeasers)

To be born free is an accident.
To live free is a privilege.
To die free is a responsibility.
--Brig. Gen. James Sehorn

Try to look unimportant; they may be low on ammo.
--Infantry Journal

Never trust a private with a loaded weapon or an officer with a map.
--Anonymous